This is the second post of the Stadium map series of posts. Here is where I am starting to detail out the first floor with rooms and paths to the bombsites. I have made a few changes from the last article:

1.I copied and pasted the surrounding wall above the first one to increase the height of the wall, allowing higher ceilings on all of the floors.

2.I have changed the texture of the field to a different grass (in the editor it shows up as concrete but I assure you it is grass in-game).

3.Started blocking out the first floor rooms and staircases.

4.I have basically flip-flopped the location of the stairs on the first floor and the kitchen / CT spawn on the second floor. I am going to be moving staircase with the landing onto the right side of the map, while moving the long staircase to the left side. I am doing this because in the original map the area where the CT spawn is will probably give to much vision over bombsite A because the goal is not in the way. Also, the way I built the floors for the map, the larger side of the map currently is the upper left side, giving me more room to build the kitchen instead of a small staircase with a landing which doesn’t need much space.

Here is the original map again so you can understand what I am talking about: 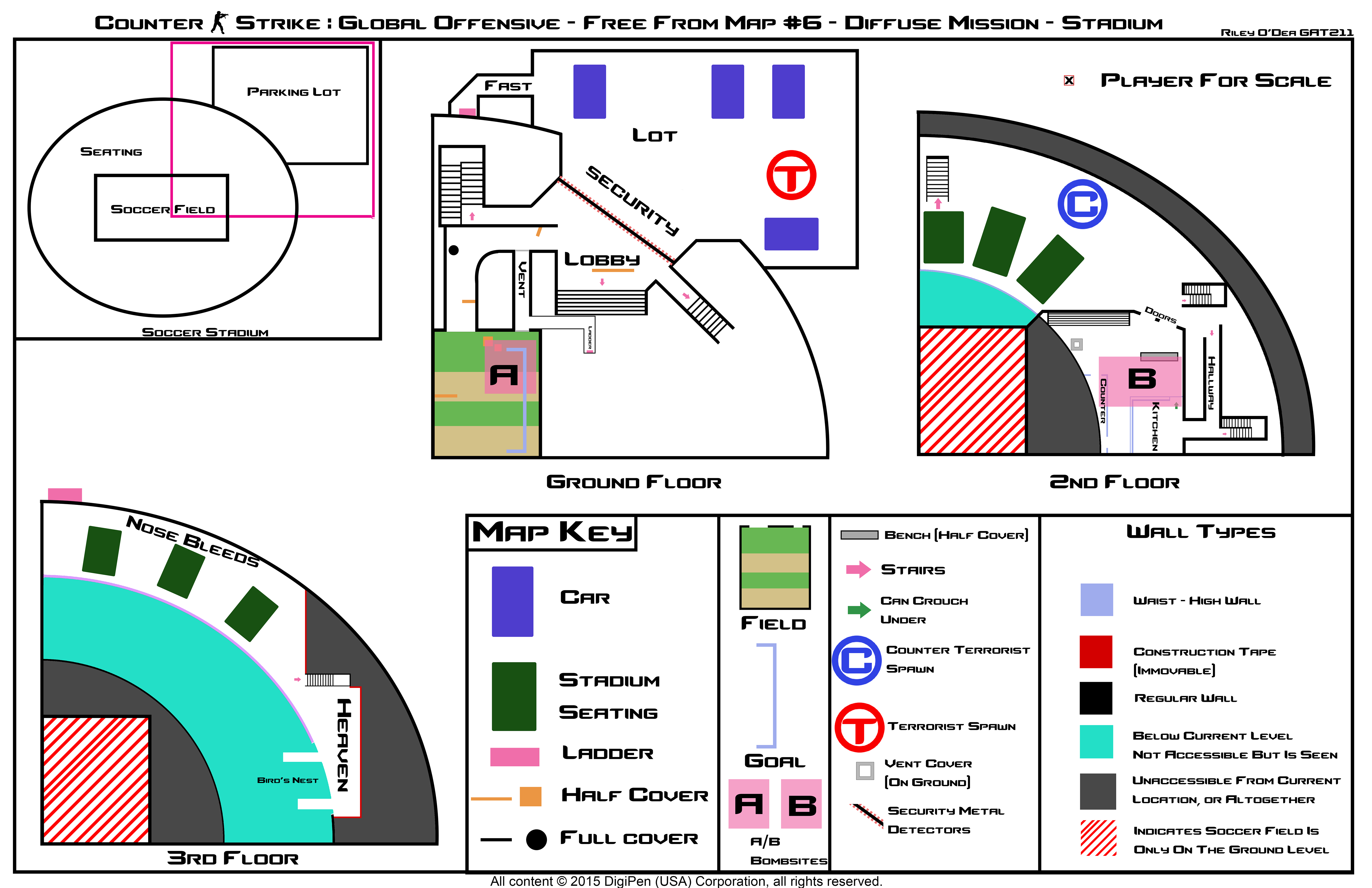 By swapping the locations of the CT spawn and the B bombsite building structure, the Ts will have a better chance to plant the bomb at bombsite A.

I have stopped after a little bit of work to show my process. Here is the overview of all the work that was added to the map. 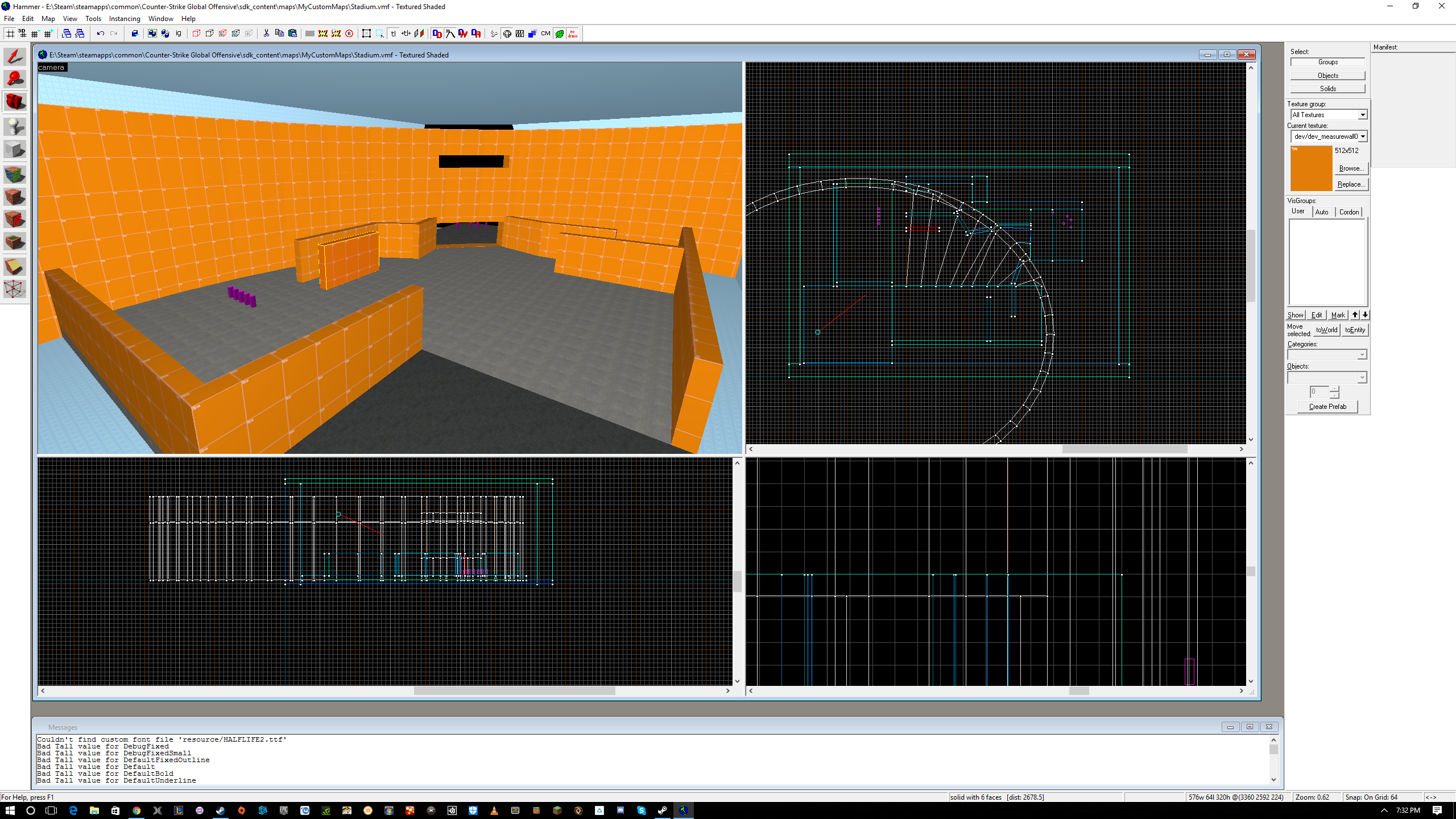 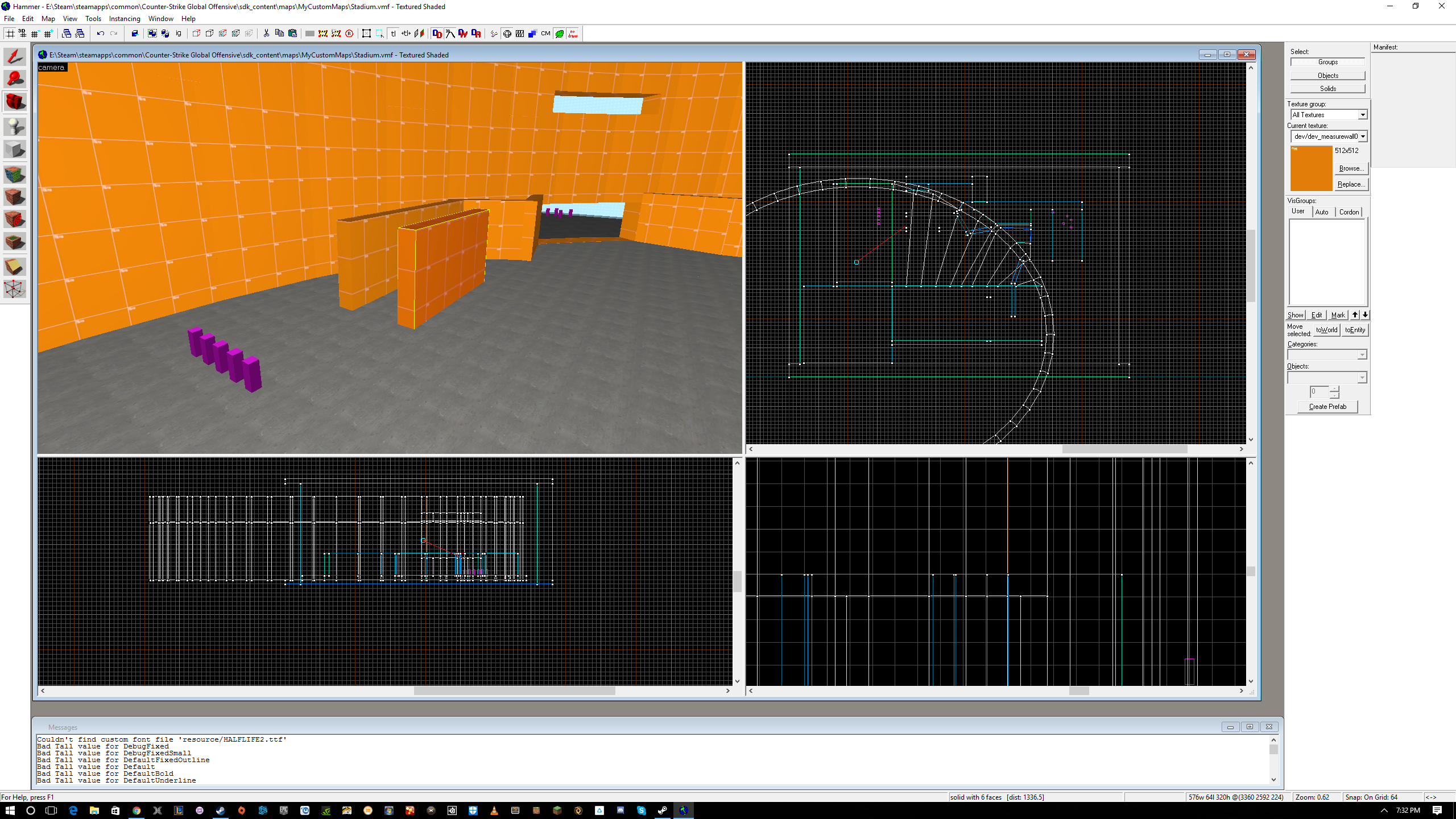 I started work initially at the entrance of the stadium with two walls that angle outward and two small hallways. 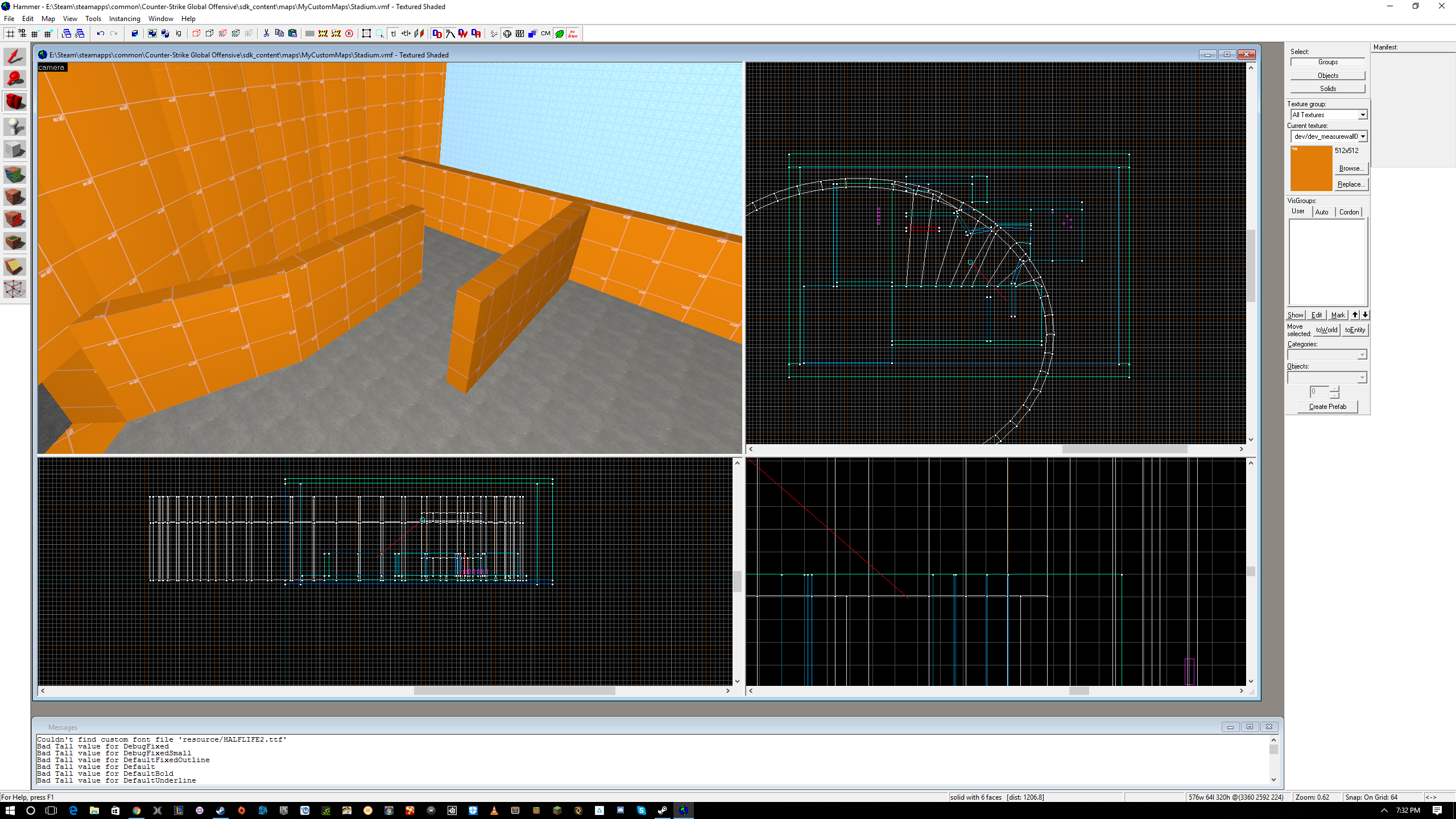 This is where the staircase with the landing is going to go. 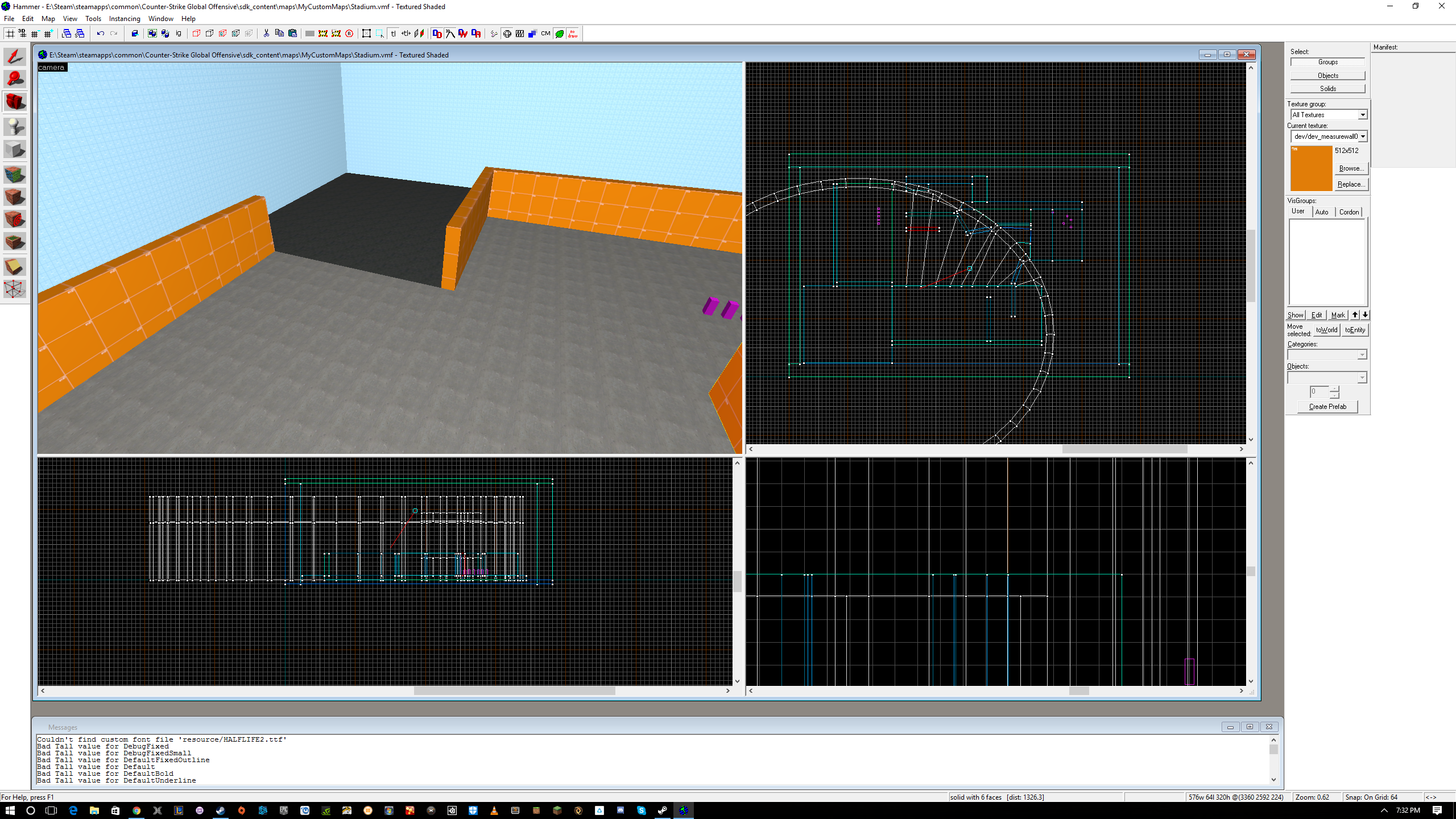 Here is where I am just putting walls around the field and where the hallway to the field will be.

One thing I have not talked about yet is some of the reasoning on why other parts of the map will be “closed off”. Since I am only using part of the stadium for the map, I want to provide reasoning within the environment to show why only this quadrant of the stadium is available. My idea for this now is that it is under construction. Other parts of the field will be blocked from multiple scaffolding that are putting lights into the ceiling. There will be large construction barriers / equipment blocking the player from moving on the edges of the map. This is probably not something that I will be able to do, but I should be able to find ample resources from the Source SDK to use. Forklifts from certain maps come to mind.