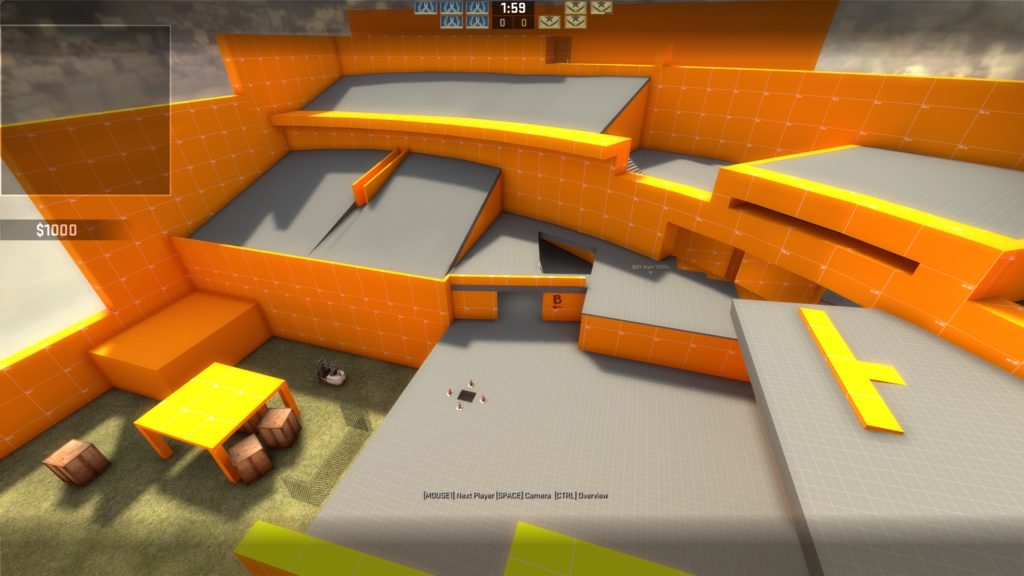 I have finalized a beta release build on the steam workshop! Feel free to check it out!

Description:
A highly vertical map that has a mix of close quarters combat, and long range combat. This map is intended to represent a quarter of a soccer stadium that is under construction. This map is intended for competitive play, as players will need to work together to control key points on the map to take an advantage.

Please leave feedback for anything! As this map is currently in development getting as much feedback as possible is important for me to make the map even better! Enjoy. Good luck, have fun.

I also have a change-log from the build right before this one. Some issues I had with the initial build of the map were as follows:

de_stadium -BETA- change-log
-Decals added throughout the map to relay where the bomb sites are to the player more effectively.

-Made a steeper incline for the seating of the stadium to give better high ground vision, and to better sell, the height of a stadium. This also decreases the cover that the high ground provides by making the player more visible. This also removes the (unintended) damage that a player would take from dropping from the ladder access to the 4th level seating.

-Added an overhang for the 3rd level seating.

-Removed ability for the player to reach the 4th level seating, from the 3rd level seating. I have done this because I want the CTs to need to be more mobile around the kitchen and take advantage of the Ts not utilizing the high ground (4th level seating).

-Adjusted the CT spawn to take slightly more time to reach the stairs of the kitchen. There is also a 3-2 split in the spawn. This is to prevent all 5 reaching the kitchen at the same time.

-Added a hole in the ceiling in the kitchen to give CTs a better arc for throwing smokes.

-Added a ladder to the kitchen area that peeks through a hole in the ceiling, reaching to the 3rd level seating. I have added this to give CTs a means of flanking the kitchen from a different direction. This ladder in combination with a box near the ladder makes an interesting sniping point for Ts (think dust 2 double doors ).

-Made “window” on 3rd level near CT spawn larger to allow a better arc for throwing smokes into the main atrium.

-Added a large brush to the seating corner of bomb site A to remove a lot of dead space that does not create interest. This brush also creates options for close quarters engagement on this bomb site.

-Removed access to the T kitchen staircase. This proved to provide too many areas for the Ts to go at the beginning of the game. The addition of the landing on the T ladder leading to the 4th level seating, and a door leading to the same hallway the staircase was removed in. This brings more meaning to the T ladder access, and requires teams to strategize around this key point on the map.

-Adjusted boxes on the B bomb site to provide sniping opportunities for players approaching from the tunnel, or players defending on the site. Also adjusted some floating boxes.

-Shortened the soccer goal so it did not cover the entirety of the tunnel.

-Made the building next to the stadium really high to remove the awkward “nest” that was there in an earlier build to stop the player from clipping the environment.

-Removed wall separating the two tunnels on the left side, entering the stadium. This created an necessary decision for the branching paths in the map. Instead of two linear paths, there is one branching path.

-Small geo fixes that had clipping with other geo.